OKO were invited to run a 16mm camera-less/found footage workshop for Scratch at Sound Festival, Aberdeen in September. Participants were introduced to film as a tactile and physical medium - scratching, painting, cutting up and re-splicing celluloid to create unique audio-visual collages.

This video is a compilation of all the participants' films, which were initially screened at the workshop as loops.

This weekend OKO will be travelling up to Aberdeen to run a 16mm cameraless film workshop for sound 2013. Part of the Scratch series curated by Katherine Groo, the weekend also features a screening of filmwerks by Ian Helliwell - “composer, filmmaker, instrument builder, installation artist, live performer, radio and film programmer, light show projectionist, teacher and writer".

Participants will be introduced to film as a tactile and physical medium, and encouraged to experiment with different camera-less filmmaking techniques, including drawing, painting, scratching, and making marks on the filmstrip.  You'll also learn how to use a 16mm projector and experiment with the filmstrip as it is projected. The workshop will culminate with a double projection screening/performance of the film created during the session.

The workshop will run from 11am-3pm at Peacock Visual Arts on Sunday 22nd September.
Posted by OKO at 11:36 1 comment:

So lots of stuff going on where we are...

&Model and XO opened this month - two brand new exhibition spaces in the centre of town. It's happnin in Leeds!

OKO will be travelling down to Flatpack on 27th March for a live film event - in one night, together with Flatpack film-goers, we'll be filming, shooting, processing and projecting some of the last cartridges of Ektachrome 100D super 8 (since Kodak discontinued its last colour reversal motion picture stock in late 2012). More info on the event soon, once the Flatpack programme's out.

We also have some exciting things in the works with Film Material Soup, and are planning a film exhibition/event in Leeds for later this spring... Our optical sound collaboration with Dave Lynch is back on too. Speaking of whom, here's what Dave has been up to...

Plus, Dave's laser praxinoscope is almost ready to fly. Mark has been helping Dave shoot and process 16mm film which will be inserted frame by frame into the praxinoscope and projected onto the clouds using a hi power laser. See more on Project Nimbus here.

And onto Chris Paul Daniels... After a stint in Groningen last year working on this live collaboration for Nordic Art - NAIP at the Groninger Museum....

....he's now just got back from Nairobi! Chris was out there for a five week residency at the Kuona Trust. Since returning to the UK, he's been back Unravelling at Turner Contemporary in Margate. Over two days of workshops, participants produced around 45 minutes of hand-painted footage to add to the longest hand-painted film in Britain.

Maria Anastassiou (also of Unravel) has also been busy down in the big smoke... A member of new artist filmmakers' group Collective-iz, she screened her new film at Now and Here at the Horse Hospital earlier in February.

Finally,  Leeds filmmaker friends Eoin Shea and Chris Hall have been busy making shiny new websites for themselves.... definitely worth checking out.

Well, it's been a while since we last posted...!

This autumn we were commissioned to create an installation for Flip Animation Festival, as part of the experimental strand curated by Sam Groves (Flatpack Festival, 7 inch Cinema, Kino 10). Full programme details can be found here.

The result - p.o.v - was screened as an expanded cinema installation at the Light House, a beautiful independent cinema in Wolverhampton on Saturday 3rd November.

Utilising two 15 second 16mm loops, p.o.v. explored the ways in which we actively perceive, experience and construct animated moving images. The filmstrips document a pre-programmed, choreographed sequence of actions carried out by a performer, shot as a single frame animation, and edited entirely within the camera: inevitable human errors occurring throughout.

The film was hand-processed, and prints for screening were made by re-photographing the filmstrip frame-by-frame using a homemade optical printer, giving a flattened and grainy quality to the image.

persistence of vision/point of view...

We also facilitated a 16mm found footage/direct film animation workshop during the day at the Light House. See below for video documentation of some of the films that participants made.

Thanks to Sam Groves, Flip Animation Festival and the Light House.

Dave Lynch: Chasing Nimbus | This weekend at AND Festival Manchester

Our long time co-collaborator Dave Lynch is presenting his research into hybrid analogue/digital/laser projections onto the clouds this weekend at Abandon Normal Devices in Manchester.

"Chasing Nimbus is a project that explores digital and analogue techniques for project moving images onto clouds from aircrafts. Artist, director and inventor Dave Lynch has been developing his ambition to deliver multiple projections onto water vapor canvases including urban vents, cooling towers, steam trains and clouds. Lynch has been developing prototypes through conversation and collaboration with a host of contributors including weapons experts, scientists, artists, makers, pilots, sailors and cloud appreciators. Lynch is hoping to test one of his early prototypes on the urban vents of Manchester during AND Festival."


Dave will be discussing his research tomorrow (Friday) in a special Q & A at Mobile Republic, Number One First Street - from 2-4pm. This artist's talk is drop in and free of charge. Go pick his brains! This is an amazing project that Dave has been researching and working on for a while, and he'll be talking through and demonstrating the following:

The laser zoopraxniscope
A reworking of Edweard Muybridge's motion image projector from the 1800s modified with a 1.5w laser. The zoopraxniscope is being developed with a host of collaborators and has recently received further R&D funding from the Royal Society of Chemistry and the Spectroscopy & Dynamics group for an arts science collaboration with Leeds University femto chemistry department.

Mobile Projection Paramotor
A modified paramotor (paraglider propulsion system) with either a TFT monitor or slide laser/LED projection system, see it before it takes to the skies in September.

Cloud Conversations
Dave is in the process of conversation with chemical physicists, weapons experts, meteorologists, cloud appreciators and a whole host more, some of these will be presented as part of the presentation.

He will be resident in Mobile Republic Manchester until Sunday 2nd September.
Posted by OKO at 12:07 2 comments:

You will be able to experiment with different hand-manipulation techniques, explore performance and live cinema, and see your work screened as a collaborative multiple projection in the gallery.

Workshops will run every Monday and Thursday, 11am-4pm, from Monday 20th July to Thursday 23rd August.

Workshops are suitable for all ages and abilities, are FREE and open access. Hope to see you there!


Jo's just completed a film commission for the Wakefield Mystery Tour... which will be installed at the Art House Wakefield from 17-19 July.

Wakefield Mystery Tour invites the audience to participate in an event based on the 15th century texts of the Wakefield Mystery Cycle: "this event will take you in and around the City, where you will bear witness to the life, death and rebirth of one man, told through illustration, performance, recorded sound and film."

The film, shot on a combination of standard 8, super 8, 16mm and 35mm slides, is a post apocalyptic take on "The Harrowing of Hell", and forms the final part of the tour.

You can book (free) tickets by contacting Wakefield Theatre Royal on 01924 211 311 , or visiting theatreroyalwakefield.co.uk.

This Wednesday, Jo will be joining Unravel founder Chris Paul Daniels to give a presentation on the Unravel project so far, as part of the Henry Moore Institute's Peripherique artist-led event series: 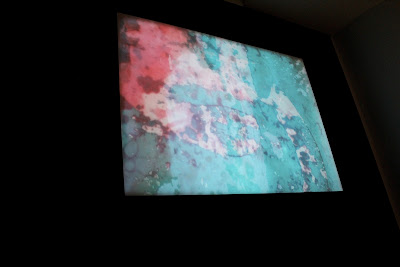 As well as screening some of the raw 16mm hand-painted footage and a section of the digitised 16 hour film (with edited soundtrack), Chris and Jo will be talking about the project in relation to their own filmmaking practice and ideas relevant to the project, including collaboration, participation and a discussion around using film in a contemporary context.

The talk will run from 6-8pm on Wednesday 22nd February in the HMI Seminar Room. Free, no booking necessary.  Hope to see you there!
Posted by OKO at 10:52 2 comments:

This Sunday - Olsen at the Hyde Park Picture House

A little something for the weekend...

Programmed by Will Rose & Sarah Handley

Described by film critic Jim Hoberman as “beautiful, terrifying, and determined to storm the doors of perception,” ‘Seeking The Monkey King’ is a furious beatnik analysis of the state of America, and a sensory rage against the horrors of capitalism.

Supported in part by Leeds City Council
Posted by OKO at 10:23 1 comment:

The performance appropriates and re-works Leeds 78, a film produced in 1972 to support Leeds’ bid for the Commonwealth Games in 1978.

Mark came across a 16mm print of the film in 2010. The film remains a bit of a mystery – there is no online documentation or discussion about it that we could find. This is perhaps unsurprising, as Leeds was unsuccessful in the bid.

The film contains some beautiful shots of Leeds International Pool (now demolished) and Leeds Kirkgate Market (currently under threat from outside developers). There is also a section devoted to the construction of a Commonwealth Olympic Village, shown as an architectural model, which was never built.

Repeated viewings of the film led us to reflect on the ways in which Leeds is seen from the outside, and from the inside-out, about how cities evolve and change, about a struggle for a sense of identity, about what is lost to history, and what is found, or discovered, or re-discovered.

The stories that we uncovered through our research drew us to compile a playful but critical slide commentary that accompanies the film. The commentary was inspired in part by Anthony McCall & Andrew Tyndall’s Argument (1978) and consists of 78 35mm slides, which are projected alongside the film. Each time the film is performed, the slides are evaluated and re-edited so that they remain current.

Many thanks to Derek Horton for the documentary photographs above of Leeds 78 at M1 > Dark Heart, Project Space Leeds, February 2012.
Posted by OKO at 10:20 1 comment:

OKO
OKO, founded in 2009, is Joanna Byrne and Mark Pickles, who have been making, performing and screening experimental film and live expanded cinema together since 2003. OKO also runs creative super 8 and 16mm filmmaking workshops to help ensure that film remains a viable medium for artists and filmmakers working today.

View my complete profile
Sign up here to get news on future events & workshops...